One day I'm complaining about the weather then the next day may be a similar day of weather and I'm enjoying it. My mood dictates my complaining.

I've been documenting my successes and difficulties of no complaining for the month of December.  My complaining hasn't reduced that much; I wish that I could report that it has, but I must be honest.

The positive that has come from this challenge is my ability to not connect with my complaining. I am learning to allow my external and internal complaints to happen, but not let it dictate my feelings.

In my last "No Complaining" update I talked about how I complained to a fellow co-worker about my lack of pay. We all want just a little more. What I noticed from watching the complaint pop out was my lack of attachment to it. I care that I don't make as much money as I would like, but I'm reducing its ability to dictate how I feel.

I've been watching Andy Rooney on 60 Minutes, who is one big complainer. He whines about his watches, hand bags, and everything else in his life. His complaining has made him millions of dollars. He even complained because 60 Minutes gave him a watch with no numbers on it. The audience just chuckles at his observations.

He whines and gets rewarded. It's because of his tone. If he whined without including a bit of humor to his voice no one would watch him.

The same goes for politicians. The weaker party always whines about the party in power. They do this to keep bringing awareness to the issues. Eventually people take notice when government inadequacies affect them. The weaker party can say, "We've been saying that for the past two years."

We don't notice this as complaining because they do it with authority. They make a claim and shout it to the world. The anger masks the complaining as a strength instead of a weakness.

The Silver Lining of Complaining

Most people in my life whine for the sake of whining, but never look for a silver lining. They just point out what's wrong with a situation, but do nothing with this information. I don't mind a bit of complaining if it's lined with something funny, makes a good point or creates a compelling reason to take action.

On my way home I noticed my complaining kicking in during my commute home... again. But this time I wasn't attached to the pain. I noticed these feelings then thought about eating dinner with Nikki and posting this blog post. Weaving the direction of my complaints into a positive feeling or letting it spur me into action has done wonders for my happiness.

If you enjoyed this article I know you'll like:

Build Your Resilience in 10 min! 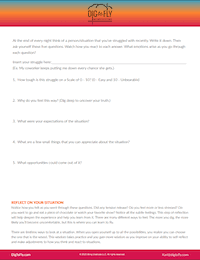 Your career/business success is based on how well you process your struggles and help other people with their struggles.

Get our free printable to quickly adjust your perspective and join the top 10% of business leaders.

Yes, Send Me the Printable

Get the Printable in Your Inbox:

Please enter your name and email address below to receive the - “Dig to Fly Method” - sent to your inbox for instant downloading.